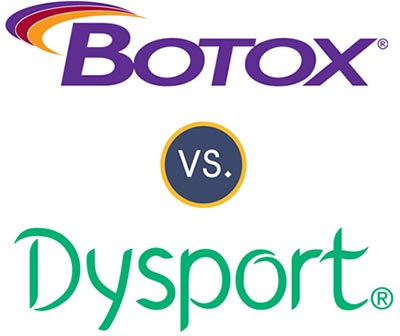 Dysport and Botox are two common treatments most known for their use in wrinkle reduction. Botox was the first to hit the U.S. markets after approval by the Food and Drug Administration (FDA) in 2002. In 2009, Dysport was approved by the FDA and became a major competitor. Though Botox is still more widely known and more popular, there isn’t much reason behind this. They’re both viable options for treating crow’s feet, frown lines, and other wrinkles.

In general, both medications are effective, but Botox has more name recognition because it was first, it’s been around longer, and its company has marketed the product more effectively. If you are considering having either Dysport or Botox injections, it’s best to discuss the pros and cons of each with your dermatologist in New York City. But take a quick look at the similarities and the differences between Dysport and Botox injections.

What Are Dysport and Botox?

Dysport is an injectable derived from botulinum toxin type A, which comes from the botulism-causing bacteria. Although Dysport is derived from a toxin, it’s completely safe as administered by your dermatologist. It’s been modified specifically for medical use. Dysport is injected into wrinkle-causing or spastic muscles, causing them to relax. Dysport can reduce the visual appearance of wrinkles.

Similar to Dysport, Botox is an injectable medication that’s also derived from the botulism family, though the chemical structure of Botox is slightly different than Dysport. Botox is administered similarly to Dysport: injected directly into the muscle, causing wrinkles. Botox is a safe option when administered by a Manhattan dermatologist, and it continues to have a great safety record. In 2011, a review of 6,200 injections found only two cases with side effects of bruising and eyelid drooping.

While both treatments are well known for their cosmetic use in reducing wrinkles, both have similar medical applications. Both Dysport and Botox have been successful in treating:

Both Dysport and Botox type A toxins from the botulinum family. They are very similar in molecular structure. Both have heavy chains in their structure that bind cell membranes and light chains that inhibit the release of acetylcholine to the cell membrane. Essentially, these two medications interfere with interactions between the nerves and your brain, causing relaxation of the affected wrinkle-causing muscle.

Dysport and Botox are considered to be similar in price. Though Dysport treatments may run slightly lower in price, you typically need more frequent Dysport treatments, as compared to Botox, to achieve the same effect. Therefore, the pricing ends up working out about the same for both.

While Dysport and Botox are derived from the same family, they are different in molecule shape. This molecule shape affects how they diffuse and how dosage is calculated. This has made the comparison of Dysport and Botox difficult because dosages are not universal. The major difference is that Dysport works on smaller proteins and is better for larger areas but can spread in the skin more easily.

Botox has been more widely used, and so many NYC dermatologists have a better understanding and predictability with dosages and results. Since Botox works with a larger protein, it stays in your muscle and is thought to spread less in the skin. While this means better targeting with Botox, it could be a disadvantage for treating larger areas because you’ll have more injection sites.

Dysport has proven to have a faster onset than Botox, so it’s often used when patients want faster results. You’ll often notice results with Dysport one to two days after treatment, while you won’t see results from Botox until three or four days later. Also, because Botox is more commonly used, you may develop a resistance to Botox over time. Dysport can be an excellent alternative for those who have developed resistance to Botox.

In 2011, a doctor did a test where he treated 90 patients with half Dysport and half Botox on either side of their faces. It was a blind study where neither the patients nor the researchers knew which side was receiving which treatment. Two-thirds of his patients reported a preference for Dysport. However, this study was funded by the makers of Dysport, which caused some concern. Additionally, there were major differences in the dosage rates of Dysport in comparison to Botox. In that same study, dosages of Dysport were 3:1 compared to Botox, meaning they used a stronger dose of Dysport than Botox.

Comparing Dysport against Botox is difficult because of the dosage issue. Dosages are variables decided by your dermatologist. They ultimately determine the effectiveness and results of your treatment. Both Dysport and Botox are effective, but different dosages make it difficult to pinpoint exactly which is more effective.

Side Effects and Risks

While both Dysport and Botox have excellent safety records, there are some side effects and potential complications with both. In rare cases, individuals have an allergic reaction to the injections. You should not receive Dysport or Botox injections if you are allergic to the botulinum toxin or cow’s milk. You should also not receive injections while you have an infection or muscle weakness.

In addition to these conditions that may cause your dermatologist to use extra caution with Dysport and Botox, there are a number of uncommon but potentially life-threatening side effects you could experience after injections. If you experience any of the following side effects, seek medical attention immediately:

As rare as they are, these side effects should be taken seriously and reported to your New York City dermatologist. Overall, both Dysport and Botox have great safety records, and you shouldn’t hesitate to get treated if you and your dermatologist agree these medications can help you achieve your desired goals.

Important Reminder: This information is only intended to provide guidance, not definitive medical advice. Please consult dermatologist NYC about your specific condition. Only a trained, experienced board certified dermatology doctor or pediatric dermatologist could determine an accurate diagnosis and proper treatment.

Do you have any questions about Botox Injections? Would like to schedule an appointment with an internationally recognized, award winning, top rated dermatologist in NYC, Dr. Susan Bard of Manhattan Dermatology Specialists, please contact our Midtown NYC office for a consultation with a cosmetic and laser dermatologist.

Our site is the source of information about dermatology-related conditions and procedures. This information is intended for patients looking to learn about our New York dermatology practice and to make an appointment to see one of our physicians. This information is only intended to provide guidance, not definitive medical advice. Please consult a doctor or dermatologist about your specific condition. Only a trained physician can determine an accurate diagnosis and proper treatment. Terms and conditions are subject to change.